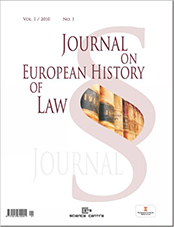 Summary/Abstract: After Napoleons defeat in the battle of Waterloo / Belle Alliance (1815) and his abdication as emperor of France, the governments of all European countries assembled in Vienna, in order to restore the dynastic order and the territorial situation as it has been before the era of Napoleon. This convention, known as the “dancing convention”, had – besides the restoration of the “old world” – yet another purpose: To unite the monarchies of Austria (Habsburg), Prussia and Russia to guarantee “law and order” in Europe. This was directed against the national-democratic movements, which had, since the 1830’s, spread through Europe. They claimed civil rights and independence from the ruling monarchies. The treaty refering to this collaboration was called “the Holy Alliance”. It was followed only some weeks later by the “German Federation” (Deutscher Bund), by which all German states promised to subdue all “revolutionary actions” on their territories, especially in schools and universities. These alliances, althought of strictly upholding the monarchic structures of these states, blocked democratic movements for many years, but was able to keep peace in Europe for almost 60 years.