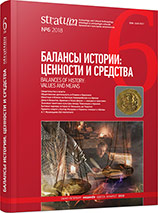 Summary/Abstract: The article is devoted to the interdisciplinary problem of archaeology and numismatics — the dating of burials according to the coins present in them in the light of the situation with the dating of several necropolis burials in the area of Lake Auliekol (Eastern Kazakhstan). The authors established chronological frames, within which there was the greatest probability of dating for explored burials with coins (one limit is established by the date of the younger coin, the second by the dynamics of burials after E. M. Pigarev). For the first time, the numismatic material obtained during archaeological research on the necropolis near Lake Auliekol is published (39 silver Jujid dangs of 14th c. from the five burials). A comparison is offered of the found coins with the coins of this period found in the hoards and cemeteries of Western Kazakhstan, the adjacent regions of Russia and Eastern Kazakhstan. A brief analysis of changes in composition of money supply in the eastern lands of the Jochid khanate in the 760’s—770’s AH was carried out. This approach made it possible to justify the dating of the burials at Lake Auliekol mainly within the first and second third of the 14th c. with numismatically valid probability.