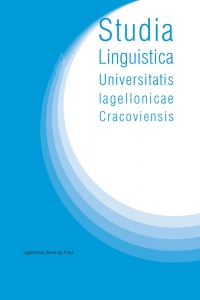 Summary/Abstract: Since electronic communication became widespread, one of the typical features identified in e-language and commented on, also as an aspect of linguistic analyses, has been acronyms and abbreviated language of various kinds. It has been particularly visible in English, as this language, unlike many others, shows great flexibility with regard to such modifications, mainly due to homophony between numerous words and individual sounds as well as lack of inflectional endings, which otherwise would limit the abbreviation options. However, the current overview of a selection of social networking sites does not appear to demonstrate any striking presence of this marker of computer-mediated communication (CMC). The present analysis therefore attempts to investigate the contemporary status of online language abbreviations in English, with the aim of discovering the actual visibility and frequency of use of such items as well as identifying their most popular forms found online. In particular, the research focuses on three social networking sites, i.e. Facebook (private accounts and fanpages), YouTube, and Twitter, trying to establish which factors contribute to the preference for abbreviations: the limitation of the post length, the degree of informality and closeness to the post addressees or the anonymity of the post author. Additionally, the investigation also takes into account the nationality of the users, and notably the status of English as their first or second language, as well as their gender, on the assumption that these variables play a significant role in the selection of this aspect of online discourse.