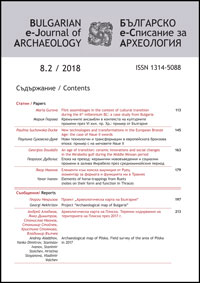 Summary/Abstract: In many aspects, the Bronze Age was a formative epoch in European history. It was a time of movement and change, of travel, contact, cultural transmission and social transformation. To a large degree, the shape of the Bronze Age network that connected the Aegean/Mediterranean regions with the interior of Europe was predetermined by physical geography. Nevertheless, during the Bronze Age cross-cultural connections became increasingly stronger and allowed trade and exchange, as well as other, less peaceful forms of social interactions, to become intensified across vast areas. The archaeological evidence clearly reflects this, and suggests multi-directional interactions, including technological co-evolution, between contemporaneous connected societies. A prime example of this is the diffusion of flange-hilted swords of type “Naue II”, a pan-European weapon technology that bears witness to profound changes in warfare and society. This article provides an evidence-based interpretational framework that focuses on the distribution pattern and archaeological contexts of Naue II, connecting historic events with transformative changes in the material and social fabrics of Bronze Age Europe.