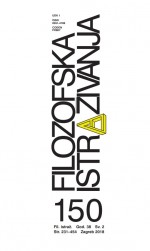 Summary/Abstract: The author analyzes Nozick’s political philosophy of minimal state, to present its significance and disadvantages objectively. The author focuses on Nozick’s view of the emergence of the state by the act of the invisible hand of the dominant protective association, from the ultraminimal state to the minimal state. The central part of the paper is Nozick’s theory of justice, where the author points out its specific weaknesses and inconsistencies. In the context of a theoretical debate with John Rawls on the central issue of distributive justice, the focus is on criticizing the modelled concept of justice. The author also problematizes Nozick’s perception of certain segments of Marxist theory, to find ideological exclusivity. Finally, the author comments on Nozick’s abandonment of libertarian worldviews, giving an objective perspective on his political philosophy.