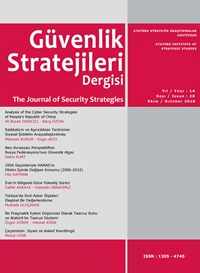 Summary/Abstract: Actors in Palestine position themselves with respect to the developments in historical process, and also change their strategies based on this new position. Islamic Resistance Movement (HAMAS) is one of actors evolving like that. Considering HAMAS’ position in Palestinian society, determining its role in the developments in Palestine, and analyzing the transformation process of HAMAS is the key to understand Palestinian issue. This paper elaborates the factors influencing transformation process of HAMAS, the winner of 2016 elections, from an organization rejecting the participation to the elections, the contribution to Palestinian national unity, and the negotiation process into an organization joining 2006 elections, reflecting a political will for Palestinian national unity and requesting an unconditional seat at the negotiation table, and it also elaborates how it is transformed in organizational level. When the transformation process of HAMAS is analyzed, its decision to participate in 2006 elections is an important turning point. In this paper, HAMAS’ decision to participate in 2006 elections as a political party, its performance in power within first four years and impacts of this on its position in Palestine after 2006 election triumph are elaborated.