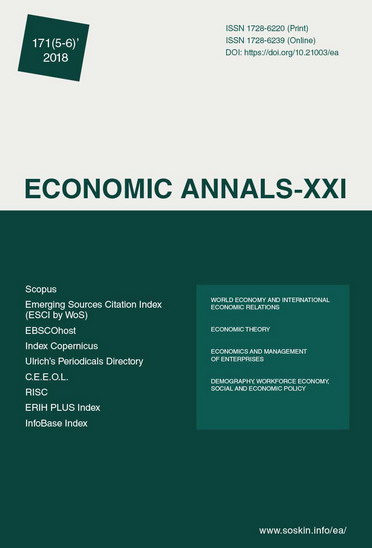 Summary/Abstract: The consequence of the military aggression of the Russian Federation is the loss of control over part of the territory of Donetsk and Luhansk regions in Eastern Ukraine and the annexation of the Crimean peninsula. The events are accompanied by the objective processes of migration of persons who were forced to leave their permanent residence and move to other regions of Ukraine or abroad. As a result, a new category of citizens who are the internally displaced persons (IDPs) has arrived in the country counting for millions of people. In such circumstances, the study of the interdependence between gross regional product (GRP) and the IDP migration is topical and reflects the ongoing social and economic processes in a big European country. As a result of the study, a two-layer neural network with an error back-propagation model that simulates the nonlinear impact of the number of internally displaced persons on the dynamics of gross regional product has been constructed. According to the number of IDPs, regions such as Donetsk, Luhansk, Kharkiv, Zaporizhzhia and Kyiv, including Kyiv city, are among the first ten regions of Ukraine. Based on the data from the abovementioned regions, we have formed a statistical sampling in order to formulate and test the prospective economic and mathematical model. The study of mutual correlation function graphs by regions has allowed justifying the value of the time lag, which shifts an array of explanatory variables along the time axis, on average, into nine periods (three quarters). According to the results, only for Kharkiv, Donetsk, Luhansk, Zaporizhzhia and Kyiv regions, there is a significant correlation between the studied indicators. This conclusion is substantiated in view of the fact that the number of IDPs, in the structure of which only about 23% represents the working age population, impacts the size of the gross product growth in the regions. The abovementioned regions account for 75% of the total number of internally displaced persons. The estimation of the forecast reliability, based on the 2017 data for Dnipropetrovsk region, points to the high accuracy of the developed model. The author of the article has identified specific features that accompany the processes of internal migration of the able-bodied population. In particular, based on the correlation function, the value of the time lag, which is shifted by the effect of IDP movement into a separate region, has been substantiated. The author has developed a neural network which establishes nonlinear regression dependence between the number if IDPs and the dynamics of GRP with high reliability.