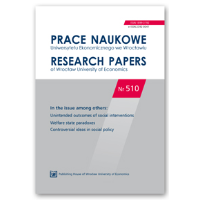 Summary/Abstract: European old-age pension systems face multiple challenges. On the one hand, governments are concerned with the fiscal effects of ageing societies. On the other hand, there is a social pressure on maintaining standards of living during the retirement. Such tension is one of the most significant socio-economic conflicts in modern politics. During last 25 years, policy makers tried to answer these challenges by pension reforms. In general, a trend towards reducing social rights can be distinguished, which is to a significantly smaller extent accompanied by improvement of coverage and benefit levels for some groups. This research analyses old-age pension reform trajectories in three European countries: Greece, France and Germany. It focuses on the generosity of pension benefits, access to pensions, and anti-poverty function of the pension systems. The paper assesses, whether over a period 1990–2015, a convergence took place between the countries and if yes, what was its direction.