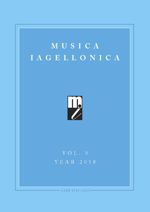 Summary/Abstract: In searching for a way to deepen and intensify its spiritual life, the post-trident communityfound considerable inspiration in medieval philosophical-theological leaningsand artistic expressions. The personality and work of Bernard of Clairvaux (ca.1090–1153) represent one of the best examples of the diverse forms and levels of thisimpact. Several typical themes of Baroque mysticism had their archetype in Bernard’smysticism and their symbols were applied to visual art as well as music through textsset in music. However, it was the hymn to the name of Jesus (Jesu dulcis memoria)that became the most popular inspirational source for poets and musicians of the 17thcentury. Originally only some stanzas of the hymn, which were sung in a simple, monodic,syllabic form with a rhythm based on Latin prosody, became a relatively popularsource of musical adaptation in the polyphonic setting from the last two decades ofthe 16th century. The initiative came from Rome, where the first musical anthologieswith Bernard’s rhytmis were published in the 1580s. It is probable that the Romananthologies stirred up greater interest in setting Bernard’s poetry to music in polyphonicstyle, even in the Trans-Alpine region, but there were also other incentives whichled Lutheran musicians to begin composing works on text of the hymn attributed toBernard. The tradition of setting several stanzas to music in a musical cycle caught onamong Lutheran composers of the 17th century. Thomas Schattenberg, Andreas Hakenberger,Samuel Capricornus as well as Daniel Speer followed it. Jubilus Bernhardi,Capricornus’s cycle of 24 concertato motets, is unique because it was the only one inwhich all 48 stanzas of the hymn were set to music. It was composed during the periodin which he served as director musicae in the Lutheran church in Bratislava in the1650s. At the time when Capricornus was the Kapellmeister at the court in Stuttgarthe published this work (1660) with modified instrumentation. This new adaptationwas most probably a reaction to the local tradition in response to Bernard’s work andinstrumentation practice.