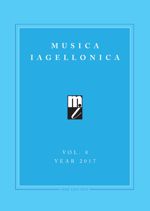 Summary/Abstract: The Rokycany Music Collection (RMC) consists of altogether 15 items: 10 mss.,2 printed items and 3 mss. with additional printed scores attached to them. Thereare 901 handwritten compositions, and 236 contemporary printed items (includingadditional scores). 665 compositions survived in the form of part-books. Twenty-oneper cent of the repertoire consists of polychoral masses and motets.From the preserved musical prints we can identify six individual collections from theperiod 1557 until 1607 and two anthologies from the years 1564 and 1590.As far as the sacred music of Andrea Gabrieli, there are preserved:I. Five parts of 4 handwritten records of his motets in ROk A V 20a-e, firstly publishedin Venice in the year 1587 in the print of Concerti.II. In ROk A V 40, which consists of the Bassus part of the print of Corollariumcantionum sacrarum from the year 1590 and a handwritten part of 21 compositions,there are published 6 Andrea Gabrieli’s motets in the cited printed source.As far as the sacred music of Giovanni Gabrieli is concerned, the RMC has:I. Five (uncompletely) preserved handwritten parts of the 8-part motet in ROK A V20 a-e: namely Iubilate Deo omnis terra, servite Domino in laetitia for 2 choirs, No. 7.Firstly published in 1597 in the famous print of Sacrae symphoniae on pp. 12–13.II. In ROk A V 40, in the cited Bassus part of Corollarium one Giovanni Gabrieli’smotet has been published, namely the 10-parts motet Deus, Deus meus ad te de lucevigilo for 2 choirs, No. LXIV.In this context there should be mentioned seven not completely preserved anonymouspolychoral motets with Czech texts and one motet attributed to three different composers,all from ROK A V 20 a-e.The analysis shows that in general, the Bohemian compositions have the same featuresas those of Europe — differing in the case of the number and quality of use of thecori-spezzati technique. The Bohemian polychoral works are approximately on thelevel of the early works by Andrea and Giovanni Gabrieli. While the two most importantmusic collections from the 16th and 17th centuries surviving in the territory ofthe historic Hungarian Lands, i. e. the Bardejov (BMC) and the Levoča (LMC) musiccollections, originated from the local German evangelical communities, the Rokycanylitterati brotherhood, from the late 16th century up to the 1630s, came mainly fromthe Czech, humanistically educated bourgeoisie. In their denomination, the membersof the Rokycany litterati brotherhood were mainly Utraquist Protestants.Comparing the BMC and LMC collections with the RMC collection, there are twoimportant differences — the minimal number of organ tablatures in the RMC (onlyone fragment of a new German tablature) and, especially, the strictly sacred repertoire.In comparison with BMC and LMC, the RMC repertoire consists of relatively earlymusic, plus new polychoral concertante music up to c. 1640. The repertoire, common toall three collections compared here represents all three basic compositional strands ofthe time: the earliest (music of the 16th century Low Countries composers and theirfollowers), the middle (reflecting the late 16th century repertoire: Jakob Handl-Gallus,Orlando di Lasso, and others), and the last and most extensive, which includes worksby composers living in the first three decades of the 17th century. Music was mainlyimported via the main Nuremberg trade and diplomatic road.