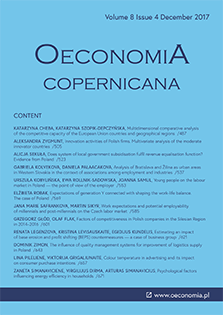 Summary/Abstract: Research background: This paper observes especially the position of cities, urban areas in the context of global value chains — GVCs. Global value chains reflect specialization and labour division of companies, mostly multinational enterprises – MNEs. MNEs can be considered flagships of some industries. Such flagships influence suppliers and purchasers. MNEs are a part of networks or have got access to such networks that combine dispersion of the value chain, the boundaries of the firm and across national borders. Purpose of the article: The impetus for this work was to look at the position of Slovak cities (Bratislava, Žilina) in order to look for sectors that can help to develop the city and its adjacent regions, particularly cross-border regions. The paper discussed how the attribute of the cross-border regions gives the cities more advantageous position in GVCs. Methodology: Applying the method of location quotient allowed to shed a light on the GVCs, which cities participate in. Some cities were in a position to take advantage of participation in GVCs. Findings & Value added: Examined cities are located in the western part of the Slovak Republic. Discussion about the attribute of the cross-border regions can stimulate new ideas for finding causalities in city sprawl or in specialization patterns in the industrial structure of the city. Discussion further fosters the comparison of two cities strengths and weaknesses of each of them that were summarized in terms of employment and industrial exploitation of GVCs. This is the first finding and value added of the paper. The second one is that the method of location quotient is simple but provides clear evidence of the regional development or decline in particular industries and at the time of observation.