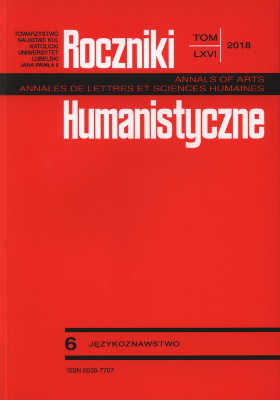 Transformacje języka polityki a media (1918-1939): Prezydenckie przemówienia radiowe i dyskurs publiczny II RP
Transformations of the language of politics and media (1918-1939): The President’s radio speaches and public discourse of the Second Polish Republic

Summary/Abstract: The aim of this paper is to show communication and cultural aspects of transformations of the language of politics which took place as the result of the impact of development of media technologies and social processes of 20th century, which have formed public doscourse. The analysis describes the phenomenon of the language of politics or—widely—political communication in the context of mass media. Using the elements of content analysis method, the author made the attempt to analyse and interpret historical material. Analysed media content, which senders were the major politicians of the epoch of Second Polish Republic, as well as their attitude towards new media of that time. Giving the analysis of the political discourse of the epoch, and reflecting on differencies in communication process at the beginning of the rebirth of Polish state in comparing to the contemporariness, the paper was the attempt to indicate the tendencies of transformations of political communication and the language of politics, which appeared in 20th century and to some extent survived up to these days, even if the media and technologies of dissemination of information and political autopresentation have changed.