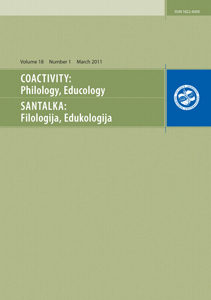 Summary/Abstract: The paper provides analysis of linguistic aspects of the lithuanisation of smartphone operating systems (An - droid and Windows Phone) and their adaptation for work in the Lithuanian linguistic environment. Having analysed the data of lithuanisation of smartphones, it was established that the aforementioned operating systems could be attributed to partially localised OS. Furthermore, the comparative analysis of linguistic localisation of operating systems in question showed that there were considerably more flaws in linguistic localisation of Android OS than those of Windows Phone OS. Windows Phone OS texts were evaluated as more corresponding to the norms of standard Lithuanian language. Most of the terms used in both Android OS and Windows Phone OS are included in the approved terminology sources. Unapproved, inaccurate, liter- ally translated terms, and non-standard loanwords constituted only a minor part of all terms used in OS texts.