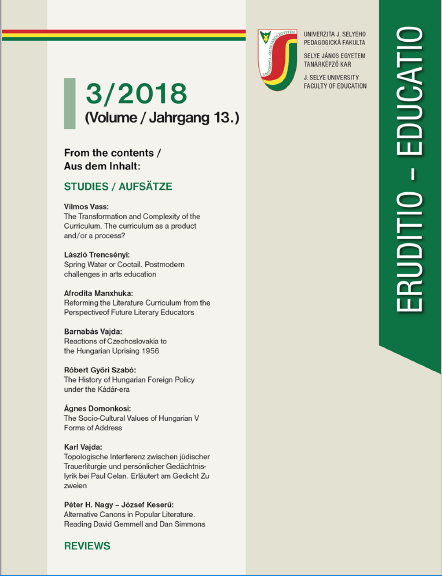 Summary/Abstract: The starting point of the study is the conflict between classical (academic) and alternative canon. Some prominent texts of speculative fiction can notably stage this conflict (as a possible textual strategy) by confronting us with the experience that mainstream literature and popular registers are inseparable. The reading of these texts can prove that the aesthetical canon is not equivalent to cultural elitism. In contemporary literature, some works of speculative fiction – works of science fiction and fantasy in particular – support this idea. The study – by reading of David Gemmell’s Troy Series and Dan Simmons’s Hyperion Cantos – exemplifies that the principle of innovation does not necessarily destruct the existing canon, but it integrates itself into the canon while rearranging it. The works of Gemmell and Simmons employ such poetical and rhetorical techniques that are able to modify the system of expectations created by the evoked genres (mythological fantasy and new space opera) and also lead us to reconsider the classical literary canon. They both indicate that the artificially created cultural hierarchy can be set in motion by rereading the works of popular literature.