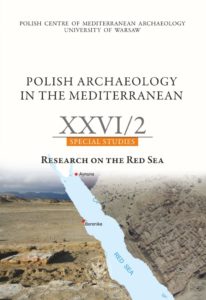 Summary/Abstract: Berenike Trogodytica was one of the key harbours on the Red Sea coast during the Ptolemaic and Roman periods and was a major trade and exchange hub connecting the Indian Ocean and the Mediterranean. Berenike’s geographical position was extraordinarily propitious owing partly to its natural harbours, protected against the prevailing northern winds, as well as its location in the vicinity of an ancient viewshed, the large peninsula of Ras Benas. This paper discusses how multifaceted geoarchaeological approaches to the study of ancient ports can contribute to a better understanding of the mechanisms and logistics of maritime trade, as well as fluctuations in its quality and quantity. It also sheds new light on the significance of the effect that local and regional palaeoclimatic, landscape, seascape and environmental changes had on the development and decline of the port, and its changing role within the Red Sea–Indian Ocean maritime network.