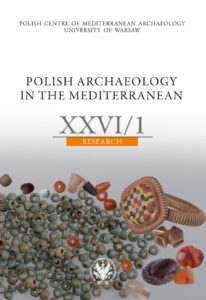 Summary/Abstract: The article reports on archaeological and conservation work carried out by the expedition of the Polish Centre of Mediterranean Archaeology University of Warsaw in cooperation with the Sudanese National Corporation for Antiquities and Museums in two consecutive seasons in the winter of 2013 and 2014. The excavations focused on the southeastern part of the site. They led to the discovery of a second monastic church (South Church) adjoining the church (North Church) known from Peter Shinnie’s work at the site, as well as a sanitary complex consisting of latrines and associated rooms located along the east wall of the monastery. Building material from the South Church, textual and pottery finds recovered during the two seasons, as well as conservation of the wall plaster preserved in the North Church are reported in this article.