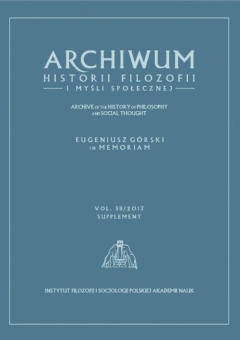 Summary/Abstract: The article discusses the main assumptions of “critical realism”, which is a relatively little known strand in contemporary philosophy of social sciences. The most characteristic assumption of “critical realism”, which to some extent justifies its name, relates to the autonomy of the object of those sciences from their epistemic practices which clearly opposes recently popular trend in social sciences, namely social constructivism. The second element of its name stems from both the critical philosophy of Immanuel Kant and from the practice of social criticism, which is linked with by far the most controversial claim of critical realism that is with typical for that strand of thought negation of so called factvalue dichotomy, maintained by Marxism.