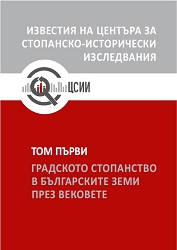 Summary/Abstract: The article analyses the spatial distribution of the industrial enterprises in Sofia in the framework of the overall urban development of the city from the time of the creation of the modern industry until World War II. It seeks to explore the evolution in the spatial distribution of the industry and to outline the factors determining the trends in this aspect. In Sofia there were practically no significant manufacturing enterprises around the time it became Bulgaria’s capital, but this radically changed within the next two decades, during which were built dozens of new plants. However, this industrial development brought many new challenges to the city, including questions regarding the integration of the factories in the urban system. In addition, the city authorities had to deal with a number of environmental concerns like water and air pollution. First, the article examines several characteristic cases of individual plants with the aim to outline main motives in the decision process regarding the selection of proper locations. The article also deals with certain state regulations and urban plans that tend to direct the process and try to create larger and compacter industrial zones towards the end of the examined period. The first regulation plans paid no special attention to the location of the industry. Gradually the urban planners became aware of the importance of the issue and various ideas were proposed in the second decade of the 20 century, but this question was elaborated in details in the project of German urban planner A. Mueussmann from the late 1930s, which despite its formal abolition in socialist Bulgaria had a significant impact on the capital’surban development.