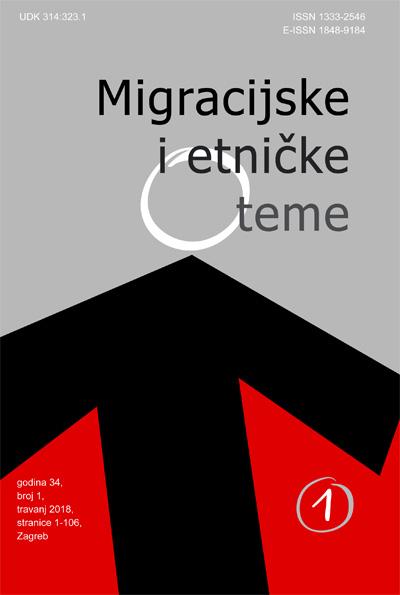 Summary/Abstract: This paper has the intention to depict the spatial and temporal dimensions of international migration in Macedonia. The observations are based on historical documents, from archive data and published papers all the way to contemporary records and data on immigration and emigration, as well as on interviews with Macedonian citizens who live abroad. Emigration and immigration are reviewed in two periods: first, from the earliest settlements in the area of today’s Republic of Macedonia until its independence in 1991, and second, the period from proclaiming its independence until today. Only the major migration flows that left their mark in the spatial, economic, social and cultural organization of the country are presented in the paper. Migration flows in the period of the Ottoman Empire, which have had great influence on the current demographic composition of the population of Macedonia, are given emphasis. However, an overview is also provided for other immigration flows towards Macedonia throughout history until today. A part of the paper refers to recent history and emigration after 1964, as well as to the emigration of Macedonian citizens in the period after 1991. Although estimates have been made, the question of exactly how many Macedonian citizens live outside their home country remains unanswered. At the same time, the paper touches upon an interesting topic of intensive foreigner immigration flows towards Macedonia in the period after its independence, especially from Albania, Turkey and Kosovo. Contrary to the immigration flows of foreigners, the emigration flows of Macedonian citizens are highlighted. Therefore, the positive net migration in the country is due to the immigration of foreigners with temporary and extended stay. At the same time, Macedonia is a part of the Balkan migrants’ route for the migrants from Asian and African countries.