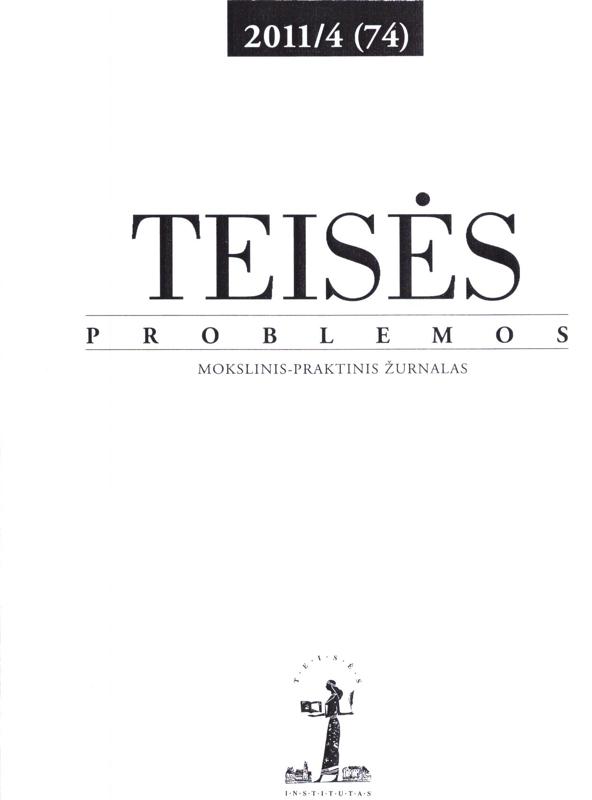 Summary/Abstract: The article provides criticism of theory and method proposed in the monograph of prof. Alfonsas Vaišvila. The author of this article has a notion that a research work proposing particular conception, theory or method may be evaluated taking into account the following aspects: to what extent the provided conceptual constructs are systematically completed, comprehensive and suitable for use, as well, how precisely, interesting, informative and originally the material reasoning and explaining the ideas is submitted. Hence, the criticism of the monograph provided for in the article is based on evaluation of adaptability and versatility of the proposed constructs, as well doubts arising during the analysis whether the construction of the conception is correct (first of all, the reasoning, and at the same time – reliability). Upon the discussing in detail particular shortcomings of the monograph, the conclusion is that the material provided is not convincing upon any of the previously mentioned aspects. Notwithstanding the declared aim, the work fails to provide a solid systematic theory. Although the method is proposed, too many exceptions are to be made. It is very important, that these exceptions seem to be formulated in a rather arbitrary way. The proposed method also lacks freshness, as it repeats and develops not only the previous publications of the author of the monograph, but as well ideas of other authors (particularly, of Karl Marx and Rudolf von Jhering). And the “achievements” of states which apply (for example, China) or which did apply the method are not inspiring at all (at least in the field of human rights). Evaluating the presentation of the material it was noticed that the work is penetrated with personal attitudes and contains factual mistakes, inaccuracies and other indecorums. Although there are some new, interesting elements, they do not prevail. As well, it is very important that the monograph raises additional ethical doubts, related with stimulation of intolerance and discrimination, which significantly reduces the versatility of outlook of the proposed conception (particularly the authentic application thereof). Presumably the majority of supporters of contemporary human rights concept will regard the conception of prof. Alfonsas Vaišvila as merely unacceptable.