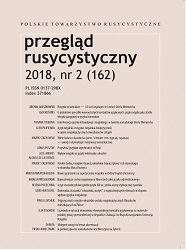 Язык старообрядческой публицистики XIX века: попытка характеристики явления
An Attempt at Stylistic Evaluation of the Phenomenon of the Language of Journalistic Old Believers Texts in the 19th Century

Summary/Abstract: The article is the first attempt at characterizing journalistic Old Believers’ texts from the 19th century from the linguistic perspective. The research focused on the works of Konstantin Golubov published in the years 1864–1866 in the journal ‘Istina’. The academic problem consists here in the fact that the Russian language of modern Old Believers’ texts is not generally extensively analyzed. Additionally, because of the specificity of these texts, this language cannot be analyzed in line with modern stylistic criteria. At first glance, it seems obvious that they were written in an informal variety of Russian. What is more, it is necessary to refer to Old Church Slavonic elements which determine the specificity of these texts, as well as analyzing borrowings from the literary Russian language.