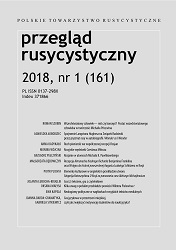 Summary/Abstract: Michał K. Pawlikowski (1893–1972) — an eminent Polish writer. He was born in a noble family in eastern Belarus. Pawlikowski graduated from the Russian Gym¬nasium in Minsk and studied law in St. Petersburg. After the Second World War he was in exile. He worked as a Polish and Russian language teacher at the University of Berkeley. In the weekly “Wiadomości” published in London, in 1955—1972 he ran the column “Okno na Rosję”, devoted to Russian culture.