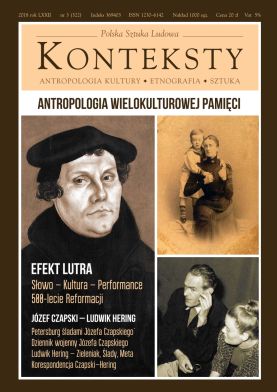 Udo bogini Wenus – o 96. tezie Marcina Lutra
The Loins of the Goddess Venus – on the 96th Thesis by Martin Luther

Summary/Abstract: A presentation of a teaching of Protestantism according to Heinrich Heine, contained in the essays: The Romantic School (1833-1835) and The History of Religion and Philosophy in Germany. The Martin Luther 95 theses became a sui generis “theological mine” (H. Schelling), whose explosion contributed to, i.a. the removal of paintings from Protestant churches and replacing them with “a musical canvas” - the religious cantata. In the dispute about the sale of indulgences Henrich Heine sought the signs of a wider process: the battle waged by Christian spiritualism against pagan sensualism, proving that this conflict was also reflected by Renaissance painting, which he defined as Protestantism of sorts while recognising “the loins of Venus” executed by Titian to be a successive thesis by Luther. Heine identified the “spirit of Protestantism” with freedom, and this compelled him to perceive Renaissance art as a process of emancipation from the yoke of Catholic spiritualism.