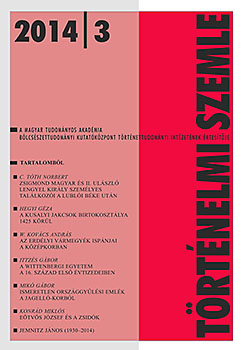 Summary/Abstract: The paper aims to analyze the religiosity of the Scolari, a double-rooted family which developed social connections in the Kingdom of Hungary and in the Republic of Florence as well. By the first decade of the 15th century, three key members of the lineage: Pippo, called Lo Spano (1368/1369-1426), his brother, Matteo di Stefano (1370/1371–1426) and their cousin, Andrea di Filippo (†1426) had already obtained important secular and ecclesiastical offices in the Kingdom. Pippo, having been promoted to baronial rank by Sigismund of Luxemburg, became one of the most influential members of the royal court. Also Matteo participated in his success; they shared offices and ownership of estates in Hungary. At the same time, Andrea served the King as bishop of Várad (Oradea, Romania). Written testimonials, housed by the Florentine, Hungarian and Vatican Archives, show three distinct patterns in the ways in which the three Scolari expressed their desire of supporting religious institutions as well as of exercising mercy. Among them, Matteo seem to have been consciously donating only to Florentine religious institutions, meanwhile Pippo supported rather those located in the Kingdom of Hungary. Andrea’s case is best thought of as a combination of the two models. Pippo’s attitude in religious practices shows conformity with similar tendencies of the ruling elite in Hungary, meanwhile Matteo’s case exemplifies the role prestigious merchants played in the patronage of religious institutions in Florence. As members of the ruling elite, they developed close ties, both in their home and in their host lands, to the most important religious orders, monasteries, convents and churches. We find among the institutions patronized by the Scolari: the predecessor of the San Salvatore al Monte Convent and Church, the Santa Maria degli Angeli Monastery, the Cathedral of Fehérvár (Székesfehérvár) and the Cathderal of Várad. They also founded monasteries and chapels at both places and contributed significantly to the growing popularity of the Observant friars. Thanks to Pippo’s influence, three Scolari relatives and two of their trusted men occupied church offices in the Kingdom of Hungary between the 1410s and the 1430s. These examples well illustrate that members of the family expressed their religiosity in conformity with local costumes both in Florence and in Hungary as manifestation of wealth and social status and as means of gaining further political influence and obtaining indulgence.