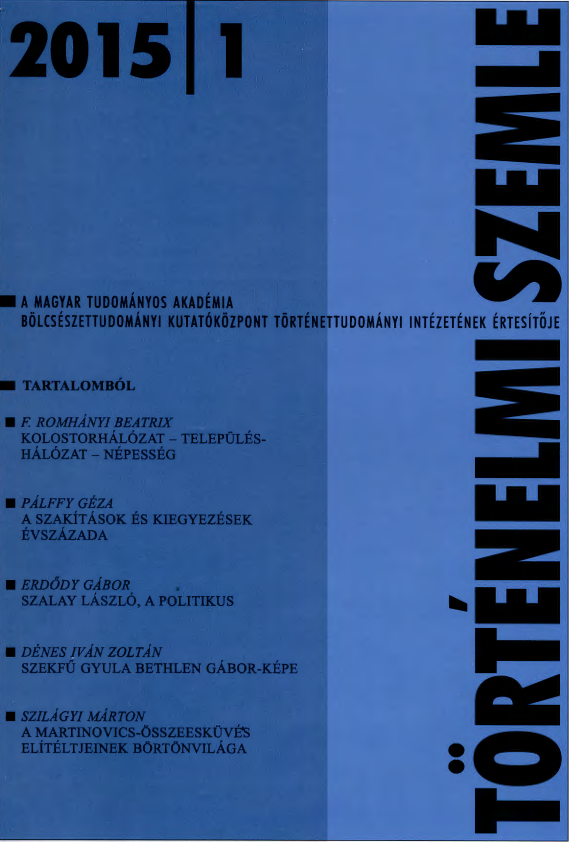 Summary/Abstract: A champion of constitutional centralization against the municipalism represented by Kossuth, the historical role and political oeuvre of László Szalay, who was born in a poor but literate noble family on 18 April 1813, was skeptically viewed by his contemporaries and has been treated the same skeptically by posterity. Whereas some people criticized him for being a utopist and a doctrinaire, others praised him as a great scholar-politician with a European vision who had implanted in Hungary the western constitutional ideas. As a person simultaneously attached to the idea of national renewal and to progressive European values, the course of Szalay’s career was considerably influenced by his enlightened paternal inheritance, by the university lectures of István Horvát focusing on national traditions, the close friendship which attached him to baron József Eötvös from 1827 on, the personal example of Ferenc Kölcsey, and, last but not least, by the teachings of contemporary German and French liberal thinkers, before all Felicité Lamennais, Alphonse Lamartine, and the Hegelian professor of Berlin, Eduard Gans. He greeted the Parisian revolution of July 1830 as the dawn of a new age, but he was soon disillusioned by the indifference that the bourgeoisie, intoxicated with their own richness, showed towards the misery of the masses, in the face of which he engaged himself to be the champion of the emancipation of the lower classes under the banner of Christian humanist philanthropy, and achieved the synthesis of Hungarian and European values on the basis of Jewish-Christian culture. The ideas of count István Széchenyi, who urged for a break with self-praising feudal nationalism and counter-productive gravaminal policies, likewise struck him with the force of revelation. His intention to interpret facts without idealizing them, and to exert a positive influence on the „public mind” grew even stonger. It was the result of his consequent aspirations, in the service of Hungarian legal and political thinking, that the reviews called Themis (1837), and Budapest Review (Budapesti Szemle, 1840), both edited on the highest contemporary European niveau, were launched. At the parliament of 1839–1840 he was the first among the literate nobility to act as the representative of an urban community: acting on behalf of the town of Korpona, he proclaimed a centralist program with popular parliamentary representation and governmental responsibility to the parliament as its two core elements; he passionately popularized this program at the head of the Pesti Hírlap from 1844 on. Yet his resolute stance against the noble counties, which coincided with the absolutist measures initiated by the Viennese government towards the establishment of an administratorial system, brought about the decisive counter-action of the opposition leaders, whereupon Szalay was forced to temporarily withdraw. Under the influence of domestic political developments which unfolded from 1846 he again entered the lists and took part in the work of the last feudal diet which laid the foundations for the constitutional transformation. In the Batthyány administration which was formed in 1848 he was head in the ministry of justice lead by Ferenc Deák of the department in charge of preparing legislation, and then struggled for the independent Hungarian state as a delegate to the German constitutional assembly then in session at Frankfurt. After the collapse of the Hungarian efforts he continued the fight in Paris from January 1849 under the direction of László Teleki. The capitulation at Világos and the subsequent brutal revenge shocked him so much that he continued to be haunted by them throughout his emigration in Switzerland. He found consolation in the writing of history. Urged by his consort, he finally returned to Hungary in the spring of 1855, and supported Ferenc Deák in the debates of the parliament in 1861. In December 1861 he was elected as chief secretary of the Hungarian Academy of Sciences, a post he held until his death on 17 July 1864. Already his contemporaries thought that his passing was an irreparable loss for his country.

„A földrajz ellen sok mindent lehet tenni, kivéve politizálni.” Antall József a rendszerváltozás nemzetközi feltételrendszeréről "You can do a lot of things against Geography except Talk Politics. József Antall about the International Conditions of the Regime Change 0 Belgium létrejöttének historiográfiája, 1830-1849 Historiography about the Formation of Belgium 1830-1849 0 A Batthyány-kormány Magyarországa a bécsi belga követ O’Sullivan de Grass 1848. évi jelentéseiben Hungary during the Batthyány Government in the Reports of the Belgian Legate in Vienna, O'Sullivan de Grass, in 1848 0 „A valóban szent népek szövetsége” útján A kortárs belga sajtó Belgium helyéről a radikalizálódó Európában - 1848. január– március közepe On the Way of the Alliance of the truly Holy People. The Contemporary Belgian Press about the Place of Belgium in a radicalized Europe - January 1848 - Mid March 2010 Krisenbehandlung nach den napoleonischen Kriegen Crisis management to the Napoleonic Wars 2012
2021 © CEEOL. ALL Rights Reserved. Privacy Policy | Terms & Conditions of use
ICB - InterConsult Bulgaria ver.1.7.1115