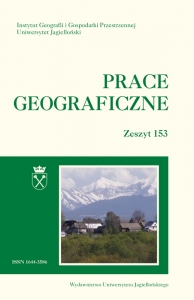 Summary/Abstract: The purpose of the study is to characterize the spatial and temporal variability of precipitation in Japan. This article uses data from 55 stations from the years 1901–2015. Annual patterns and preconditions of rainfall were analyzed. The range of variations for individual stations, the time of maximum and minimum occurrence, and the coefficients of precipitation irregularity were calculated. The temporal variability of rainfall was investigated using the linear trend method, the significance of which was determined by the tau-Kendall coefficient.The precipitation pattern in Japan shows a very strong variation throughout the country. The largest variability of annual precipitation totals is in the Hokuriku, Shikoku area along the Pacific Ocean and southeastern Kyushu with the archipelago of the Ryuku islands. The maximum monthly precipitation figures show a greater variability than the minimum values, and the time of their occurrence in each region is conditioned by the monsoon circulation and the location to the flow of major air masses and orographic barriers. Japan is characterized by a statistically insignificant decrease in the annual rainfall in most areas, but the variability of precipitation in different months and seasons shows different directions and the rate of change depending on the region.