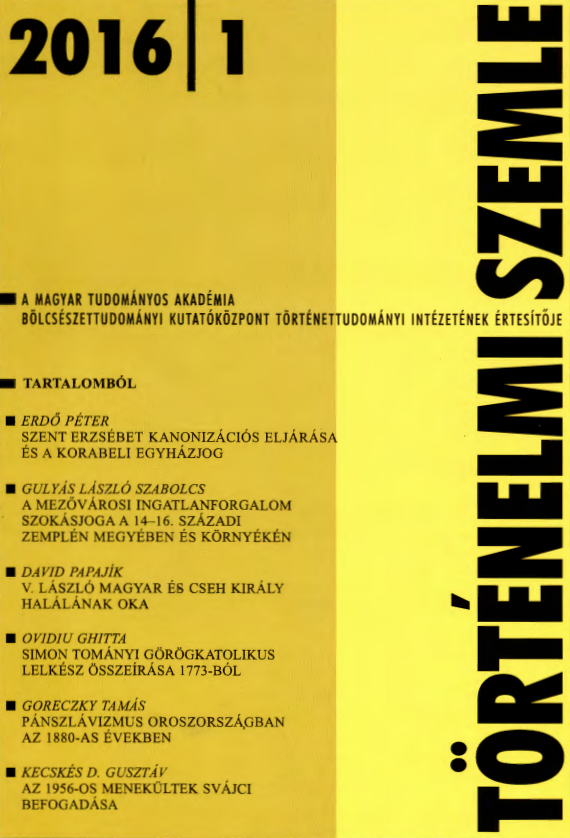 Summary/Abstract: The purchase, exchange, mortgage, alienation and bequest of real estate, as well as their offer to ecclesiastical institutions as pious donation was a general phenomenon in late medieval Hungarian market towns. Free disposition of various pieces of property – plots, houses, arable, mills, pasture, and before all vineyards – was an everyday and widely accepted occurrence. Supervision of real estate trade was a basic duty of the town council, a task it discharged on the basis of the town’s own customary law. It was the same body which put such matters to writing, and, although the ensuing real estate contracts were meant to have a limited, local degree of authenticity, practice proves that their legal binding force was in fact acknowledged by extensive social groups, both local and outsider. The present study explores the content of this customary law and its practical application in the market towns of northeastern Hungary in the late middle ages. Some of the legal institutions applied in such transactions were known throughout the country, and can thus be regarded as parts of national (noble) law. As examples can be cited the procedure employed at depositions, standing as guarantee, frivolous prosecution, or the taking into account of the right of pre-emption by kinsmen, but also demonstration by charters or witnesses in lawsuits. Other legal customs, however, were either restricted to certain areas, or otherwise common nationwide, but limited to the peasantry. Such was, for instance, pledging by drinking toast, the previous lodging of the estimated value of a piece of property in case of litigation, or, in the region of the Hegyalja, the sealing of land transactions with a delay of a year and three days, a practice evidently introduced with a view to prevent problems connected to the right of pre-emption. In forming this customary law the peasantry could rely on several legal sources. Part of the consuetudo no doubt filtered down to the local custom of the market towns from national law through the mediation of the literacy pursued by the so-called places of authentication (loca credibilia) and public notaries. Another such source may have been the legal practice of the free royal towns, which resembled parallel practice in the market towns in several points. Moreover, the dispositions of the letter of privilege granted to the town (if there existed one) were also respected. But there also existed procedures which had evidently emerged among the peasantry in the course of past centuries. By the late middle ages these different legal customs had frequently merged in distorted forms, and thus created the various customary laws which were proudly referred to in the charters of local communities (ius, mos, libertas, consuetudo etc.).