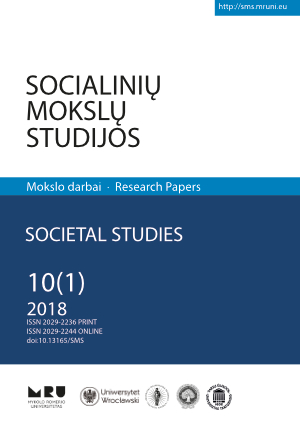 Summary/Abstract: Looking back at the first half of the 20th century reveals the subjective conception of religiosity in Lithuanian poetry. During the interwar period, the works of Fr. P. Jakas and the philosophers S. Šalkauskis and A. Maceina, who examined the social aspects of Catholicism, helped ideas of Catholic modernism to emerge in Lithuania. The concept of Lithuanian neo-Catholicism is based on the validation of the search for personal faith and for a middle ground between Thomistic transcendentalism and modernistic immanentism. This concept changes the usual religious poetry, the essence of which is the interpretation of the truths of faith and the glorification of the Lord. Modern poetry reveals a more personal, deeper relationship with faith and religion, determined by the deliberate self-determination of a mind-conscious person. This impulse is particularly evident in the pre-exile creations (1924-1944) of one of the most famous Lithuanian poets, Bernardas Brazdžionis. Publications of his early poems drew on the tone of prayer, the relation with God was rather traditional and even acting as a kind of template – it is a poetry of praise, thanksgiving and sacrifice. However, the modern human being of the early 20th century was no longer able to experience the Deity immanently. Natural, rustic, agricultural religiosity through which a person could perceive the Creator in manifestations of creation was lost. Thus, in later texts, the disturbed and restless man in the poems of Brazdžionis feels existential loneliness and begins to seek dialogue with the Lord, longing for unity with the Transcendent. This unity is perceived as the only way to realise the meaning of human existence. The poet enables his subject to become a seeker of God, giving him the right to doubt and question, reject or accept, and attempt to rewrite the biblical story. He views religion as a sign of culture and strives to restore the original essence of faith, to experience the catharsis of the believer. The modern understanding of the relationship between belief and being religious helps Brazdžionis to observe some sort of separation between society and God, the hypocrisy of people, inability and unwillingness to live according to God’s laws. He considers the issue of true and figurative religiosity, confronting sincere prayer and cold religious rituals. The poems of Bernard Brazdžionis, steeped in ideas of neo-Catholicism, enrich Lithuanian religious poetry. The existential interpretation of Christianity allows this poet to be regarded as a representative of Catholic existentialism in Lithuanian literature.