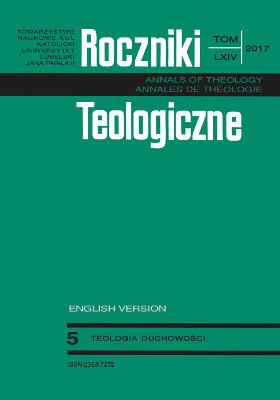 Summary/Abstract: The broken relation among culture and faith becomes “drama of our times” (Paul VI), thus, overcoming that broken relation has always been a challenge for the Church, catholic theology and spirituality. This article, first, signals the penetration of culture into Christianity and makes you more familiar with what ancients fought about culture. And next, gives two positive examples about shaping the culture through the faith; first, in the Karolin epoch (7th—9th century), using the example of Benedict monks’ contribution, second, in the golden era of French spirituality (17th century), using the examples of Saint Francis de Sales’ spiritual teachings and Saint Vincent de Paul’s educational and charity works. The further part of the article shows the progressing departure of culture from faith beginning with French Renaissance and through the era of Enlightenment until the complete cessation of common relation in philosophical currents of 19th century. The last part of the article shows the new relation of the Church to the world and culture initiated by the Second Vatican Council, which further was continued and developed through the teachings of the Popes Paul VI and John Paul II, and evangelism activity. Such relation is based upon a wide understanding of culture (what was worked out by secular science and expresses themselves (among other things) in inculturation of the faith, faith’s creative role of culture and intermediary role of faith in realization of evangelization.