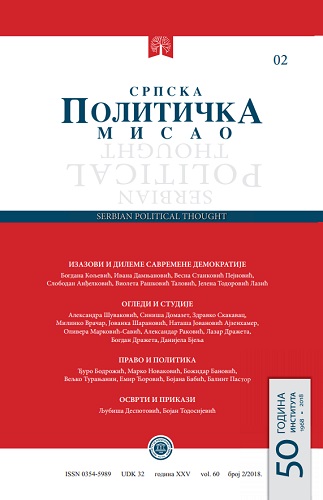 Трансформација рата на размеђу 20. И 21. Века
War Transformation at the Turn of the 20th to the 21st Century

Summary/Abstract: During the Cold War, the key role in the war transformation had two post-war processes that took place simultaneously on the international arena. The first one was the indirect competition of a super powers for the global domination over neutral, nonaligned countries and the second one was the decolonization process. In the shadow of nuclear danger, the interaction of these processes resulted in a series of local civil wars in Third World countries behind which, as a rule, were the super powers, USA and USSR. This kind of conflict became more prevalent in the second half of the 20th century, and the traditional form of armed conflict between the states has almost disappeared. The characteristics of contemporary armed conflicts differed from traditional because one side of the conflict was a non-state actor. This has led to irregularities, nonlinearities and asymmetries of contemporary conflicts as its dominant characteristics. By strengthening Islamist transnational terrorist organizations in the period of the unipolar global order, nontraditional conflicts became global and, as such, they effectively disputed the conventional superiority of the western great powers in achieving the strategic interests. Thereby, at the beginning of the new century, international global terrorism became the key determinant of contemporary armed conflicts by what they were different considerably from the local civil conflicts from the Cold War era. The return of Russia as a great power and the rising of China’s power marked the beginning of the multipolar world. The military aspect of the foreign policy activities of the mentioned states, as well as other challengers of strategic interests of Western powers such as Iran and North Korea, is marked by the new concept of war. It included the full integration of military and non-military instruments of state power to achieve political goals in which the role of armed forces is minimized, concealed or even not necessary. This view of the new concept of war was the most significant novelty in the history of studying the war.