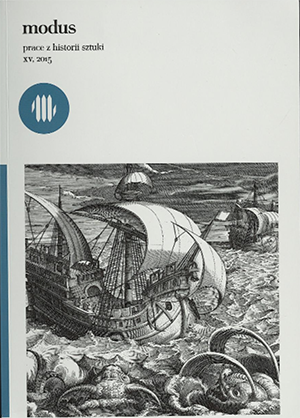 Summary/Abstract: The present paper puts forward an alternative reading of the works of Artemisia Gentileschi, challenging the interpretations, typical of feminist approaches in art history, which understand the oeuvre of the painter as reflecting her life and historical circumstances. Here, the projecting of facts from the life of the Italian artist on her two paintings depicting Susannah and the Lddcrs has been contrasted with a detailed analysis of both works, including the construction of their composition in relation to the picture plane. Such a mode of looking at paintings and the observations made in the process allowed to ascribe both works to one hand, against the prevailing attributions, supported by researchers favouring biographical attitudes towards the oeuvre of Artemisia Gentileschi, especially Mary Garrard, who - assuming as the main criterion the alleged correspondence between the works and life of the artist - ascribed the authorship of the 1610 Susannah and the Efders to the painter, whereas in the twelve years later painting saw an essential, disintegrating intervention of another artist. A response to Garrard s interpretation of the first painting was proposed by Wojciech Suchocki who analysed the importance of the image structure. Such a mode of viewing the picture, in the present paper applied also to the painting of 1622, makes one realise that the viewer approaches a painting as a plane, and it is only through perceptive viewing of the work in relation to that plane, and through analysing its structural qualities that one can arrive at an accurate conclusion on what was depicted in the painting. The way how the personages are situated in those paintings, what place they occupy and what their location in the imagined world is calls for an observation that takes into account the construction of the composition in relation to the picture plane, as it is precisely this mode of viewing that the visual structure of the work refers to.Everything shown in these two paintings reveals its sense in relation to the planar order, and not with regard to historical events or to what we know about the life of the painter. Such a reading of Artemisia Gentileschis paintings has revealed a structural similarity of both works, hitherto unrecognised by scholars, as well as an unorthodox character of both paintings, which substantiates a conjecture that both the Sasannad and die E/ders from 1610 and that of 1622 were painted by