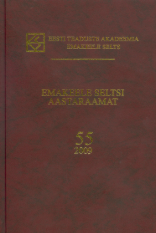 Summary/Abstract: The Estonian phoneme that has received the most attention in spoken language as well as among researchers is the vowel õ. It is remarkable both phonetically and in the shape of the written letter. The letter õ exists in only a few of the world’s languages and does not denote the same phoneme in languages other than Estonian. The vowel õ is absent in most of the languages of the neighbouring countries of Estonia. The appearance of the letter õ in Estonian has been studied in many publications. The primary introduction of õ largely owes to the early 19th-century activity of Otto Wilhelm Masing, a pastor and Estophile. Prior to this, written Estonian was based on the rules of German orthography, which were not sufficiently expressive. The vowel õ has not been uniformly pronounced all around the Estonian dialect area. The most prominent difference occurs on the island of Saaremaa. This article reviews Theodor Kaljo’s master’s dissertation on the boundary between the vowels õ and ö in eastern Saaremaa (published in 1928). The article also gives an overview of the earlier vague knowledge of this boundary and also surveys Kaljo’s struggles in defending his dissertation (finally accepted in 1934). The data used for this article derives mainly from the records on Theodor Kaljo as a student archived in the National Archives of Estonia.