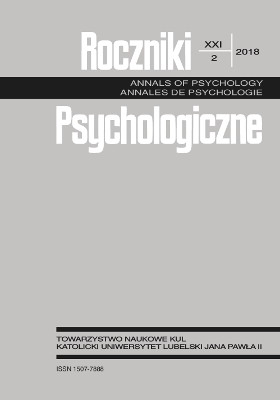 Summary/Abstract: Although personality characteristics have been conceptualized as influencing individuals’ propensity to forgive, the findings in this field are inconsistent and require further studies. The five-factor model has been explored most frequently, and personality traits, especially agreeableness and neuroticism, have been found to be related to forgiveness. This study investigated the relationships between five personality domains and different aspects of dispositional forgiveness, termed forgivingness, namely positive and negative dimensions of forgivingness of oneself, other people, and situations beyond anyone’s control. Data were collected from 153 adults aged from 20 to 55 years. The participants completed the NEO-FFI Personality Inventory and the Heartland Forgiveness Scale (HFS). Correlation and regression analyses were performed. The results demonstrated that personality traits explained variance in most HFS subscales. Neuroticism, agreeableness and extraversion were significant predictors of different dimensions of forgivingness. Neuroticism negatively predicted the overall level of forgivingness and overcoming unforgiveness of self, others, and situations. Extraversion along with neuroticism also negatively predicted total forgivingness as well as overcoming unforgiveness in general and towards others. Agreeableness was significantly related to positive forgivingness in general and towards others.