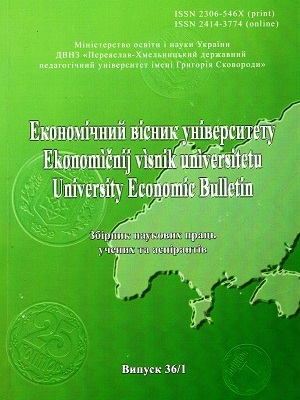 Summary/Abstract: Subject of research are theoretical and practical issues of functioning and development of state and non-state pension funds in Ukraine. The purpose of writing the article is a scientific substantiation of the theoretical foundations of formation of pension, identifying peculiarities of its functioning in Ukraine and development of recommendations regarding ways to improve its further development. The methodology of work. The work is done on the basis of studies of modern scientific views on the definition of the nature and development of the pension system and private pension insurance in Ukraine. The results of the work. The aging population and the rising proportion of the elderly increased social and financial burden on the working population and caused high attention of modern society to the development of the pension system. Building a well-functioning state and non-state pension funds in Ukraine means creating a new powerful mechanism for pension provision. The importance of such funds is determined by their ability to be a significant source of support for social standards and at the same time a battery of internal investment resources for the accelerated development of the national economy. Practical significance of the obtained results. Theoretical provisions and conclusions of this study are of practical importance in the process of improving the mechanism of financial provision of the system of social protection of the population. Conclusions. Improving pension reform will respond to the improvement of the whole economic system, because the establishment of an accumulation Fund and the system of private pension funds would create additional incentives for the release of the shadow economy and will serve as a great potential financial resources for investment and economic development.Advantages of a funded system is that it does not depend on population issues, provides investment resources of the economy, by raising funds that are accumulated in it, provides personalization and individualization of accumulated funds and provides differentiation of pensions depending on the personal savings of the person. The main threats at the introduction of a funded system are : depreciation of pension savings due to inflation.