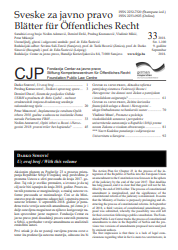 Implementacija rezultata Općih izbora 2018. godine u odnosu na izaslanike Doma naroda Parlamenta FBiH
Implementation of the results of the General Elections in 2018 in relation to the representatives of the House of Peoples of the Parliament of the FBiH

Summary/Abstract: The political process of implementing the decision of the Constitutional Court of BiH in the U-23/14 case pointed to several critical points in the electoral legislation as well as in the constitutional system as a whole. First, it turned out that there are not clear enough rules on the jurisdiction of the state and the entities to regulate the election process of House of Peoples in FBiH. Consequently, there are simultaneous initiatives to change electoral legislation at the state and entity levels, which undoubtedly leads to a conflict of competencies. Secondly, there is a clear inconsistency between the Constitution of the FBiH, the Election Law of BiH and the Constitution of BiH, so it is very uncertain how the envoys of the FBiH House of Peoples can be elected without breaking a constitution or law at the same time. And third, it turns out that domestic political actors are doing homogenization of the electorate, while they simply leave the High Representative to BiH to solve this legal and political problem. In its persistent refusal to execute and enforce the decisions of the highest court instances, Bosnia and Herzegovina has gone from the point of disregarding fundamental human rights to the danger that it will no longer be a functional state. With careful analysis of the decision of the Constitutional Court of BiH in the case of U-23/14 and the whole spectrum of its implications, it comes to the conclusion that this decision can not be properly implemented by merely modifying the Election Law of BiH. Proper implementation would mean changes to the constitutional structure at the level of FBiH and BiH through the harmonization of these acts and electoral legislation, through a clear delineation in the competencies of certain levels of government and the adaptation of constitutional and legal texts presented by the Constitutional Court's understandings and interpretations. Any changes to the constitutional structure in BiH carry the need for a comprehensive revision of the constitutional structure of all levels of government, including the implementation of other verdicts and decisions such as the Sejdić and Finci cases, Zornić, Pilav and the City of Mostar. Decision U-23/14 could therefore be a catalyst for constitutional changes, as constitutional changes are "necessarily evil" for this decision to be implemented and the state to continue to function. However, it is very certain that the problem will be solved by imposing a High Representative's decision that would become a permanent interim solution and where there would be no comprehensive review of the constitutional structure in BiH and the possibility of constitutional changes.