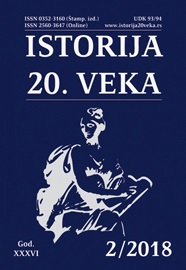 Misija Bogdana Crnobrnje u Moskvi i pitanje odustajanja od trgovinskih pregovora za 1948. godinu
The Mission of Bogdan Crnobrnja in Moscow and the Question of Abandoning Trade Negotiations for 1948.

Summary/Abstract: At the end of 1947, the Yugoslav side launched issues of expanding “trade” between Yugoslavia and the Soviet Union and signing a new protocol on mutual supplies for 1948. Deputy Minister for Foreign Trade FNRJ B. Crnobrnja, in early 1948, was supposed to deliver the Yugoslav demands in Moscow and perform all “preparatory” actions to start the negotiations. At a meeting with A. Mikoyan on January 19, the Soviet Minister agreed to deliver most of the products for which the Yugoslav side showed interest and agreed that the trade negotiations would begin “around” 10th of February. Although the beginning of the talks was promising, since the end of January, because of the problems in the political relations of the two countries, the Soviet side began delaying further talks. As the Yugoslav leadership did not react after the criticism in the way the Soviets expected, on February 21 it was announced to Crnobrnja that Yugoslavia could not count on any increase in the deliveries and on February 26, “First Deputy of Mikoyan” A. Krutikov said that protocol on mutual supplies will not be signed in the 1948. The Soviets explained this decision by Yugoslav delay in delivering supplies under the 1947 Protocol and lack of its own export opportunities. On the Yugoslav side, this decision was interpreted as “economic pressure”. Because of the consequences it had on the Yugoslav economy, it can be characterized as the first serious blow to Yugoslavia by “economic” measures. Later, the Soviet denial of Krutikov’s statement of February 26 was motivated by the intention to withhold any responsibility for deteriorating relations between the two countries.