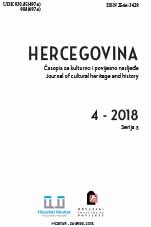 Biskupije Gornje Dalmacije na splitskim saborima 925. i 928. godine
Dioceses of Upper Dalmatia at the Church Councils of Split in 925 and 928

Summary/Abstract: The victory of King Tomislav over Bulgaria resulted in good relations between Croatia and Byzantium, which made it possible for the Church to achieve unity about the establishment of a unique church province in Dalmatia and Croatia. The Dalmatian bishops reasonably feared that the empowered King Tomislav, who after the victory over the Bulgarians gained the affection of Byzantium, and the title of "consul", according to HSM, would subjugate them to his Croatian bishop in Nin, whose jurisdiction during the previous conflicts with Byzantium spread almost to the city walls of some dioceses. In the area where, according to church acts, duke (dux) Mihael (Visevic) ruled with a certain autonomy, the same position to the bishop of Nin in the north was to be held by Mihael's bishop of Ston, which reduced the jurisdiction of the Bishop of Dubrovnik and Kotor to the narrow city region. Although, according to the positive church and state regulations, the ecclesiastical organization was followed by the civilian one, Dalmatian bishops did not require the establishment of the ecclesiastical province around Zadar, the capital city of Dalmatia, which they certainly would not have gained anyway, so they put all their efforts to establish a new church structure in Croatia and Dalmatia (Upper and Lower) gathered around the Archbishop of Split as the successor of the ancient Salona. Returning to the ancient position (antiquitus) would bring them even more desirable convenience: restoring jurisdiction over the wider territories of the Croatian state that were lost at the time of hostilities with Byzantium. That is why Dalmatian bishops persistently sought from Popes John X and Leo VI to just rebuild the late antique Salonitan metropoly, in which they finally succeeded. However, there was a new difficulty because some of the existing dioceses were not mentioned under the name of Salonitan metropoly, i.e. to the east of Split there were three dioceses mentioned: Ston, Dubrovnik and Kotor. Unexpectedly, the right to exist was not questioned only to the Diocese of Ston, which, by the way, was mentioned here for the first time in an authentic document. It can hardly be interpreted differently except that it was clear to the Council Fathers that it was, actually, the diocese of Sarsenterensis to which Ston was assigned on the occasion of its founding in 533, and in which his bishop withdrew during the migrations. Since the Dubrovnik and Kotor bishops were not mentioned as the suffragans of the ancient Salonitan Metropoly at the Salonitan councils in 530 and 533, the bishops of these two cities struggled for the jurisdiction over an ancient diocese within the Salonitan metropoly, which could only be Epitaritan diocese. The jurisdiction was endorsed to both bishops with a somewhat unusual formulation that it was, actually, a diocese with two bishops which they now needed to share justly preserving its unity, so that after the death of one of the bishops the other may govern the diocese until the new bishop is appointed. Thus, all disputes were resolved and a new church structure was established in Dalmatia and Croatia around the archbishop of the metropoly in Split, until some new times and wars when the situation would change again.