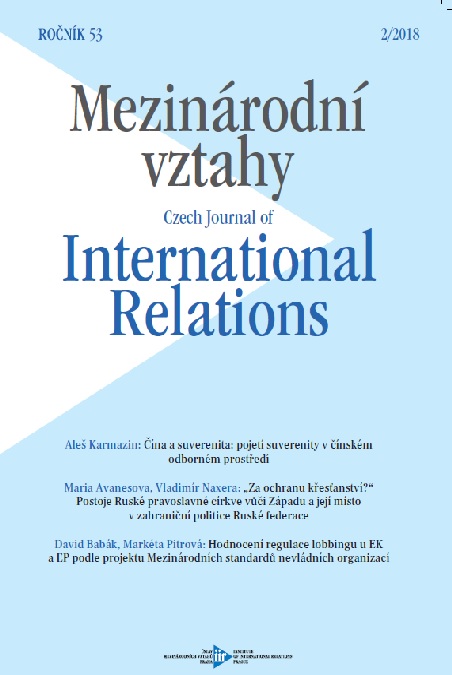 „Za ochranu křesťanství?“ Postoje ruské pravoslavné církve vůči Západu a její místo v zahraniční politice Ruské federace
“For the Protection of Christianity?” Stances of the Russian Orthodox Church Toward the West and the Church’s Place in the Foreign Policy of the Russian Federation

Summary/Abstract: Over the course of Russia’s post-Soviet development, the Russian Orthodox Church has become a significant actor in social and political relations in Russia. This text deals with the ways in which the Russian Orthodox Church’s relationship toward the West has developed and how the Church features in the state’s official policy toward the West. This paper, which is based mainly on an analysis of primary sources (state and Church documents, media), is structured chronologically. Important landmarks in it include Vladimir Putin’s entrance into the position of president and Kirill’s entrance into the position of the Moscow patriarch. The study shows that, at present, the state and the Church rhetoric are almost identical and both focus on the defense of Russian foreign policy visions and plans.