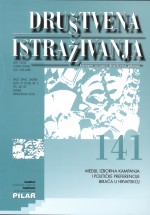 Summary/Abstract: After a brief theoretical consideration of the cultural memory and political communication in electoral campaigns, this paper analyses statements of politicians during the 2015 Croatian parliamentary campaign. The main goal of the paper is to establish the manner in which events and happenings from modern Croatian history and the various ‘collective memories' surrounding them were present in the media excerpts analysed. Research of excerpts from the leading Croatian media outlets (daily newspapers, TV stations, web portals) was performed through content analysis. The results show that excerpts including political communication about modern historical themes were present to a significant extent, and that discussions of these topics were most often provoked by the largest political parties, Croatian Democratic Union (HDZ) and the Social Democratic Party (SDP). On the level of general conclusion, it can be claimed that the electoral campaign largely became a "site of memory" where further political conflicts surrounding historical issues were generated, while discussions of solutions to numerous social problems were neglected.