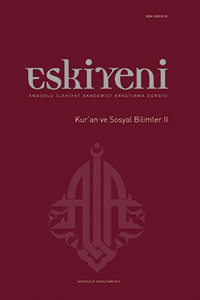 Summary/Abstract: The relation of poetry with Qur’an has been the matter for discussion since the Qur’an came. The verses of Qur’an have stressed that Qur’an is not a poem and the prophet is not a poet. Due to the opinions of Arabs about pre-Islamıc beliefs and the characters of the poets in this era, the poets in these verses are mentioned as negative. Only in the Surah of al- Shu‘arâ, there is an exception that the poets who believe and behave in a right way have been exempted. When the prophet is alive, poets read poems and then there has been a change in the topics of poetry due to the effects of Qur’an, and the poets who are inspired by Qur’an expressed their beliefs in their poems.