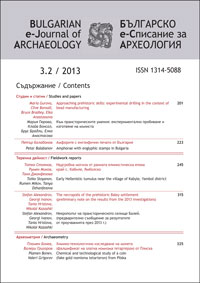 Summary/Abstract: In the summer of 2009, rescue excavations of a tumulus were conducted in relation to the construction of the ‘Thrace’ motorway. The tumulus was located to the northeast of the village of Kabyle, Yambol district and it is known as the Big Tumulus (Golyamata mogila) among the locals. Only one grave was uncovered in the north-eastern part of the mound. It is of a pyre-grave type, not particularly common for pre-Roman Thrace. The deceased has been placed on a wooden bed construction in the pyre together with his personal belongings and armor. The observations made in the course of excavations point to the conclusion that most of the inventory has been put in the pyre during the quenching of the fire by soil, after which, the piling of the primary mound began. Probably wine was used in this ritual, as revealed by an extant Thasos amphora. The armor consists of a sword and more than ten spearheads with butt-spikes. A bronze horse-bit, parts of a gold laurel wreath and more than one wreath with gilded leaves and fruits, two iron strigilae and not the least, a golden stater of Phillip II type have also been documented. Most probably, the coin was put in the mouth of the dead as a Charon obolus. The pyre-grave should be dated to the 30s or 20s of the 4th c. BC., and could be interpreted as a funeral of an officer from the Macedonian garrison of the town of Kabyle.