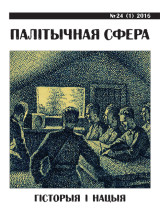 Summary/Abstract: The article evaluates the experience of nation-building in the case of ideological activity of Social and Cultural Association “Polisse”. The author analyses causes of its appearance, the tools used by its creators and the potential of the ethno-political myth they produced. The myth created by “Polisse” was a comprehensive and theoretically elaborated concept, which radically contradicted the previously adopted mythological narratives. Despite a wide range of ideas and rich argumentation, the myth failed to become a part of local identity, since it was rejected by the population of the region.