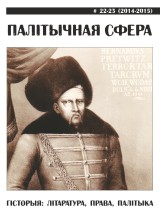 Summary/Abstract: Albert Krantz was a clergyman from Lubeck, a German humanist and author of several works on the history of the peoples of “Germaniae magnae” - in his opinion, an existing ethnoterritorial community of Germans and Slavs. The object of the study is his work Wandalia. Wandalia is permeated by the spirit of pre-Reformation German humanism and displays the classic for the late Middle Ages idea of the “own” antiquity. The author thinks that consideration of Russian subjects of Vandalia is particularly important, because this work was published even before the “Notes on Muscovy” of Sigismund von Herberstein and to this day remains almost unknown within the Russian-speaking readership.