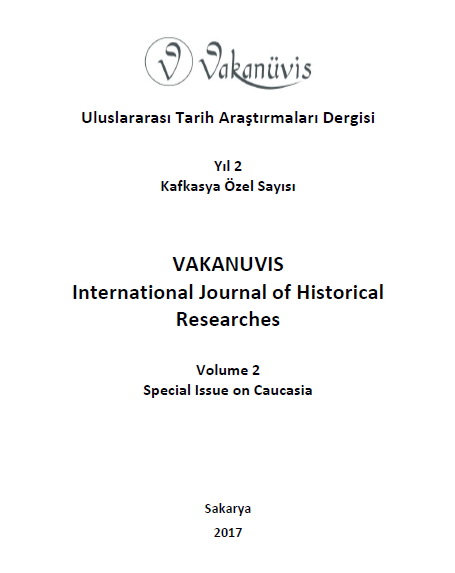 16. ve 18. Yüzyıllarda Osmanlı Yönetiminde Nahçıvan Sancağı
The Ottoman Rule in the Sanjak of Nahcivan in the 16th and the 18th Centuries

Summary/Abstract: Nahcivan, a border region that witnessed bloody battles during the centuries of the Ottoman-Safavid rivalry, became a part of the Ottoman administrative structure twice in the period covered 1588-1603 and 1724- 1735. In the Ottoman provincial administration, it was a sanjak (district) of the Revan eyalet (province). After the annexation of Nahcivan to the Ottoman realm, the province was called the “Revan and Nahcivan province” between 1588 and 1603. The sanjak of Nahcivan consisted of seven subdistricts (nahiye) and the city of Nahcivan that had twelve quarters (mahalle). The subdistricts were Gökçe, Mevâzi-i Hatun, Dereşahbûz, Arslanlu, Karabağ, Dereçam, and Bazarçayı. The economic life in the Nahcivan sanjak was based on agriculture and animal husbandry. The revenues from the sanjak – direct incomes of some of the villages and the salt mines and the taxes that were collected from council tax (ihtisab), dyeing place (boyahâne), candle mill (şemhâne), market dues (bâc-ı bazar), custom dues (tamgâ-i siyah), and poll-tax (cizye) - were all transferred to the imperial treasury as the revenues (hass) of the sultan. Besides, some of the villages were granted to the janissaries that were stationed in the garrisons of the Revan and Nahcivan fortresses in the form of timar and zeamet in an exchange of their regular salaries (ulufe).