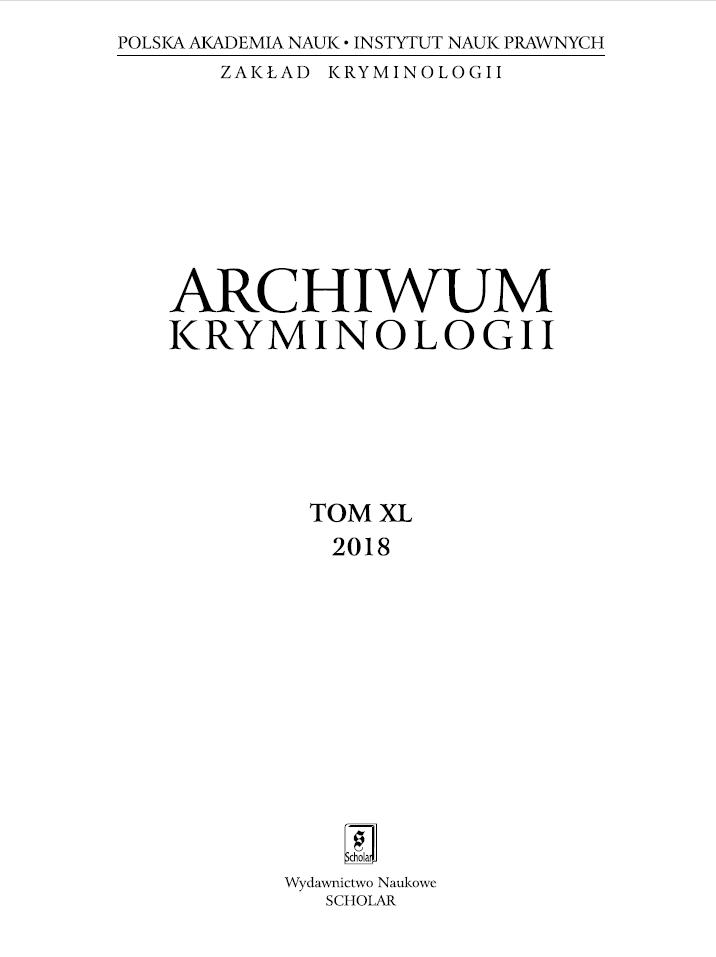 Summary/Abstract: The aim of the study is to present the results of a quantitative research study entitled“Security in Cracow”, which investigated the fear of crime among the city’s citizensin the years 2014–2016. Under the Agreement for Security concluded between the Cityof Cracow and the Jagiellonian University in 2014, the survey is held two times each year.Both the Agreement and the concept of the presented research arose from the moralpanic that was visible in Cracow in the second half of 2013, following several casesof serious offences committed by football hooligans and a widely publicised homicideof a young student in September 2013.Empirical analysis of the fear of crime faces numerous theoretical and methodolo -gical problems. For the purpose of the present research, an operational definition of fearof crime was adopted, according to which fear of crime is similar to the psychologicalconstruct of attitude, comprised of three components: cognitive, affective and be -havioural. The research was additionally intended to verify the selected hypotheseson the causes of fear of crime, that is the victimisation hypothesis, the vulnerabilityhypothesis and the reduction of social control hypothesis.The research was conducted via telephone interviews (CATI, Computer AssistedTelephone Interviews) six times – in March and September 2014 (N = 1815 andN = 1770), June and September 2015 (N = 1808 and N = 1811), April and September2016 (N = 1820 and N = 1803). The sample was representative for the gender, ageand the district of the city’s residents. The questionnaire included 33 items: 13 itemson the demographic and social participants’ characteristics, and 20 concerning:a) prob lems and threats encountered in Cracow, b) the respondents’ sense of safetyin Cracow, their district of residence and the nearest surroundings, c) victimisation,the likelihood of becoming a victim to a crime, the means adopted to prevent crime,and d) the attitudes towards the services responsible for security and public order.To measure the fear of crime, an index was constructed based on the questionnaireitems referring to its three components. In the light of the results of the past six roundsof the study, the level of the citizens’ fear can be estimated as low. However, a moderatelysized group of citizens was identified whose fear of crime was at a considerable leveland who – in future research – ought to be addressed in a more qualitative manner toexplore the underlying causes of their fear.Evidence was found to support the victimisation hypothesis, according to whichfear of crime is correlated with the experience of being an actual victim of a crime.Additionally, the vulnerability hypothesis that claims fear of crime results fromperceiving oneself as a potential target of criminal activity was partially corroboratedin the light of the obtained results. Evidence was found to support the fear of crimeparadox with reference to gender, though not to age differences. Finally, the reductionof the social control hypothesis states that fear of crime is related to the condition andstrength of the local communities. The obtained results suggest that the respondents’fear of crime is correlated with the perceived disorder in the nearest surroundings, butno evidence has been found that it is related to the disintegration of neighbourhoodties.Fear of crime remains an important social issue which influences the quality ofcitizens’ lives on the individual (personal) level, the level of local communities and onthe macrosocial one. To maximise citizens’ security, it is essential to undertake actionsaddressed to the objective (minimisation of threats and/or dangers) and subjective(focus on citizens’ sense of safety) understanding of safety.The research in question is unique on both the national and the internationallevel. Periodical analyses of this sort based on the same research questionnaire providea rare opportunity to investigate temporal and spatial dynamics of the phenomenonin question. The authors believe that the presented research will contribute to scientificdiscussion concerning the methods of measuring fear of crime and will allow the safety stakeholders to recognise the need for research-based community crime prevention programmes.