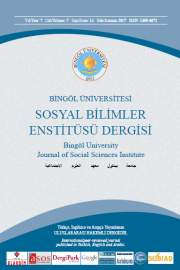 Summary/Abstract: Throughout the history there have been many common points between Turkey and Iran but also many problems were existed. After the World War I tribe revolts were considered to be the major important trouble. During this epoch the one of the greatest revolt is the Simko Agha who was the head of Shikak forces. The reasons of the Simko Agha revolt can be summarized as these: the murder of Cewer Agha who was brother of Simko Agha by Iranian; the conflict about the Kotur region between Ottoman and Iran and the demand of Simko Agha of capturing and creation of autonomous region; provocation of Russia and England. Simko has started to move against Iran to control the region and dominated the region from Kotur to Beher. Iran has controlled the Tabriz-Urmia path and retrieved the region again from Simko Agha. The conflict between Simko Agha and Iran has been continued until 1930. Finally Iran liquidated Simko Agha with the help of Turkey and accomplished the event for their own benefit.