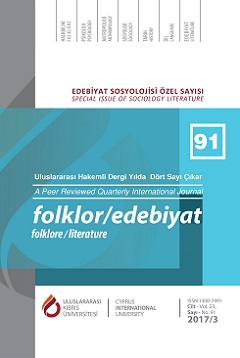 Summary/Abstract: The main tool of the caricature is the “line”. The line on its own, the characteristics of the line such as being horizontal, vertical, or diagonal and its figural characteristics such as being circular, curved, diagonal, or zig-zag create different associations and semantic fields in the mind. While the line in the caricature is processed with such tools as color, texture, shadow and perspective, it creates a discourse consisting of verbal and visual patterns. In this research, the following questions were sought to be answered by examining six cartoons published in England in the magazine Punch during World War I: What kind of image of the Turk do the lines in the England caricatures create? What kind of relationship is there between the visual content and the verbal content of the caricature? What are the concepts that make up the positive and negative contents of the images of the Turk?