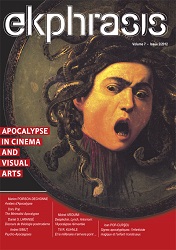 Summary/Abstract: The current issue of Ekphrasis. Images, Cinema, Theatre, Media is dedicated to New Images for Old Myths. Representations of the Apocalypse in Film, Media and Visual Arts and it seems that it could not be a more proper moment to analyse the apocalyptic imagination than in the proximity of another settled date for Apocalypse, the 21st of December, 2012. The preparations of this number have encompassed both the pre-apocalyptic frenzy and the postapocalyptic disappointment. The articles have surveyed a vast series of issues, have covered of a vast body of works, from the general aspects to the particular problems, attempting to answer a few questions. What is really new in contemporary representations of the end of the world? Can we speak of a new apocalyptic conscience? What has been preserved from the great apocalyptic tradition? What are the elements of the new apocalyptic imagination?