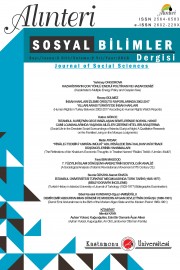 Summary/Abstract: Although the modern sociology has its roots in positivistic epistemology, in alternative discourses, pre-Comte literary figures and other social figures are considered sociologists by many due to their work and writings regarding society. Prophet Muhammad can also be studied by many as a sociologist in the light of the divine book he presented and his sayings. A sociological analysis of the revolution that was brought about in the 7th century Arabia is performed in this research in the light of his quotes and the book, Quran. Herbert Blumer and others suggested the steps of social movement, in the same way, eight steps of revolution are suggested in this analysis of revolution that are; (i) Emergence and propaganda of revolutionary idea / ideology, (ii) Organization and Integration of the members of the movement, (iii) Training of the members, (iv) Passive resistance with patience, (v) Agitation or active resistance, (vi) Armed or Physical conflict/ Direct Confrontation, (vii) The establishment of a system/ Institutionalization, and (viii) Outward expansion/ Export of the revolution . Study of other revolutions in the history can easily be reduced to these stages and these stages can easily be replicated in other cases.