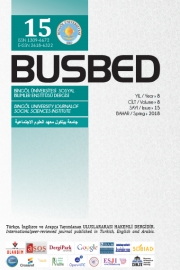 Summary/Abstract: The Schools that Sıbyan Mektebi (elementary school) and Medrese (madrasah) was more came to mind upon spoken on education in the Ottoman Empire. On the other hand, Palace had Enderun that private constitution of the state. In the period Sultan Mehmet Conqueror and Sultan Suleyman Magnificent went to a new modification how süite was for era in where in education area, sheltering traditional education concept too. Sahn-ı Seman, Tetimme and Suleymaniye were primary examples of the comtemporary approach. These occuring side of the Ottoman the side of the Europe had directed to discover that dynamic physics laws which running in the all substances with a “rationality” predominant education perspective. This direction of the continent delivered it to a enormous advance of the science-technic, how maybe it was not expected. This added up to “power” status, of course. 19th century became the century of the search for solutions to correct state’s weaknesses, in consequence, the century of a new confronting with the age which its in it. Reform struggles that in the mention century was direct lenked education’s function with adaptation of the changes to social and bureaucratic life. Even though important previously mentioned the function, this was the most basic cause that fall away of the new world perspective, with disruptions which will mentioned in article.